Organising spay clinics is always a challenge! The people we try the hardest to reach are the people who live in the remote villages along this coast where the daily wage is around $10-15 a day (if you’re lucky enough to have a job) and accessible transport is effectively non-existent. We try to bring the clinics as close to them as possible and provide support with funds, information and transport where we can. We spend the preceding weeks going over and over the details – dogs shouldn’t be fed the night before, they should be tied up around the house so they can be brought along when needed and owners should be available through the day so they are ready to bring and collect their animal.

Of course, things never go that smoothly! The animals in this area seem to share a strange psychic power and 3 times now our patients have done a runner the night before into the jungle and only reappeared again once the vet has safely packed up all her stuff and the clinic is over and done with for another 3 months! Others have managed to slip the knot and go on the rampage looking for table scraps, only returning once they’ve filled their bellies, sheepishly licking the last bits of fish from their chops before falling into a food coma.

And that’s just the animals. The owners also come with their own problems. Many times I’ve got a call 5 minutes before the allotted operation time from a desperate owner whose transport has fallen through. And then of course, there’s the very different concept of ‘time’ here. When we started these clinics, I foolishly thought people would turn up when they were told (or even, gulp, 10 minutes early), now I’ve come to realise that as long as you turn up on the right day at some point, it’s still considered to be on time! We love the ‘mañana’ attitude most of the time, but not when we have a vet available just for one day it can be a challenge!

Not to mention the natural disasters – our patients coming to a clinic in Cacique at the end of 2015 had to navigate their way around a huge hole in the road covered only by 2 wooden planks. The result of such heavy rains, they literally washed the road away.

So it’s always an adventure, but I was confident that even in my absence, I could setup 2 clinics while Austin and I were in England. The world really is a much smaller place these days and with a bit of leg work before we left we were able to rustle up the patients and once we were in the UK we used skype and whatsapp to confirm and send out details.

But the 2 clinics we setup had their fair share of problems. We had a cat who turned up in a stuffy, poorly ventilated box so by the time the box was opened, there was a very hot, very stressed cat inside and there wasn’t a chance of getting an anaesthetic anywhere near him! At the next clinic, the operation time designated for one animal came and went and the owner was nowhere in sight although the dog was duly tied up outside the house. When I finally managed to get him on whatsapp, I found out he was on the beach on a nearby island! He’d had the chance to get a days work taking people out in his boat and couldn’t turn down the opportunity to earn some money. And then our dogs made the day even more difficult by deciding they wanted to be part of the action and following our wonderful volunteer Sebastian to the clinic! They were tied up outside for the day and entertained patients and owners alike.

So this article is dedicated to the amazingness of Sandy and Renee who gritted their teeth and got stuck in and did as many of the animals as they could, and also to the wonderful Sebastian who stepped up to the challenge and volunteered on the day. He was my eyes and ears on the ground in Puerto Lindo and he wore himself out running around after owners and their animals and did an absolutely superb job.

Thank you all so much for making such a difference and persevering – these clinics could never have happened without you and me and the animals of the Portobelo National Park send you our thanks! 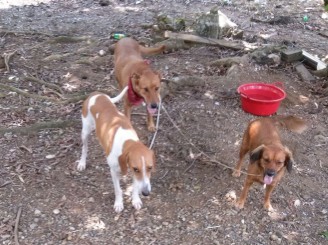 Our dogs looking sheepish and waiting for the clinic to finish 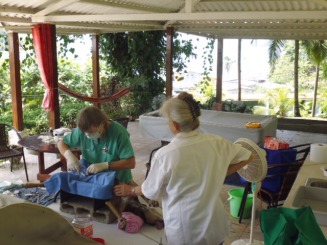 Sandy and Renee hard at work